They say those who make mistakes are those people who haven’t a clue or those who know better.
People with half a brain on a subject generally avoid possible conflict with it, however those who tend to deal with something a lot can become a bit blasé and over look a little thing that can lead to an interesting adventure, though could also lead to tragedy. Tragedy is often the outcome for those who don’t have a clue, though hopefully those who should know better know how to deal with the mistake and come out of it with a smile.
My recent mistake (though not a super critical one) lead to an interesting adventure, however I should point out it was a shared mistake and a shared adventure, and shared by two people who should know better and thankfully, by Luck and preparedness, where able to get through it.

After being on Vancouver Island awhile I wanted to explore a bit so I had loaded my folding Trak kayak onto its travel bag from the roof of my car, using the bag with wheels as a kayak cart and Boarded the ferry to Powell River as foot traffic. I was heading over to catch up with a Friend Hugh who ran an outdoor adventure operation there, he had turned down my request to join me for the paddle over the Georgia straight from Comox to Powell river, in hopes of a less character building paddle (this trip would have been 16 nautical miles and about 5 hours) but had invited me to come stay the night at his place for a great dinner and the next day head to Saltery Bay south of Powell River with the thought of exploring the area.

The next day after a lazy start, we headed of with the idea of circumnavigating Nelson Island. As we unloaded and set up the boats, Hugh asked if I was worried about looking at a chart, I replied “nah should be ok.” Hugh agreed saying “yeah I feel the same and that there should be Nelson Island!”. At this I shuddered “Ah, ok maybe we should have a quick look then.” as my inner voice spoke warnings. We perused the Chart to get exact bearings on where the island was, I did a quick distance calculation with my hand span, and stated that it would be about a 16-18 nautical mile paddle which should be about 5 hours. Hugh agreed. I ignored a little voice in my head as we stuck the chart back in the car and headed to the water.

It was a stunning day on the inside passage of BC, the mountains where swept by low clouds, the water glass flat and only a breath of air hinting at moving. As we pushed off across the liquid glass, paddling smoothly into the reflected horizon of the hilly shores of Nelson Island, we both stated how it was the perfect day for a casual paddle of a good length. We paddled along step cliff shoreline, with Cormorant perched in tiny nooks and crannies, and along the edges of large trees who’s leaves touched the water (as it was high tide) and merged with their almost perfect mirror image. This was one of those west coast winter days that was mild and calm, yet crisp and cool and left you grinning from ear to ear at the beauty of it all.
We paddled for a couple of hours and eventually stopped for lunch and a pee on a little beach. Here we found a huge sea urchin skeleton, it was almost as big as my head, and must have been bigger with it spines still attached when it was alive. After a short stop, we shoved off back on to the water, and picked up the pace we had been dawdling up to this point now we put in a good pace especially now with the ebb current going with us.
Paddling down the pass that we felt should have only taken a bit; Hugh decided to check his GPS. 4 hours into the paddle and we seemed to be only half way round. That doesn’t make sense, we must have been dawdling more than we thought. “Well we should be fine now we have picked up the pace” we commented “and we are now moving much faster, and it just as far back as it is forward.” We both agreed, still not checking any other info. 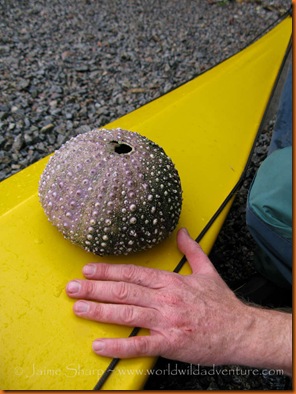 Two hours later and we were still beating along the coast of the island just rounding the western side and suddenly I realised the mistake that the little voice back at the dock was warning me of. We didn’t check the scale! It must have been a 1:90,000 scale map not a 1:50000 and my calculations where off by almost double, we had now committed to at least a 30 nautical mile (not a 16 NM) journey, and we were at this point 6 and a half hours into it. Only way to go was forward and now it was getting dark, this will be fun. We do have a GPS, but it was low on battery, Hugh had also brought headlamps, and we had a basic shelter if need be, and VHF radios, but no cell to call Hughes wife to tell her we would be late. It would be no disaster this trip, but I reflected on how it could be; We just need to injure ourselves (easily done if we didn’t have good paddling technique), get separated in the dark by a squall or strong winds, get hit by a boat, etc ,.
However for us it was a hard long paddle full of; hurt, effort and uncomfort, but also full of wonder, beauty, reward and achievement. The clouds cleared in the dark as we paddled into a ten knot head wind with a one foot swell, the moon shone down upon us and the stars danced among the clouds. Hugh and I paddled on, entering after 2 hours of darkness into the channel leading back to Saltery bay. The water became glass flat again and the wind disappeared, the stars shone from above and below us, as seals snorted at us from the rocks we paddled by. The shore became deceptively close due its reflection on the water, we paddled the shore of a large Island in the middle of the channel and at the end of it we turned to see the ferry terminal all lit up and we crossed, overly aware that we had no lights and a ferry could come anytime.
We punched across the channel tired and sore, and pulled up to the dock, dragging ourselves out of our boats, after sitting in them for 6 and half hours nonstop, since our last pee break, and had just finished a 10 hour 31 nautical mile paddle, without intending too, with 3 hours of it being in the dark. Oh and on top of that I had done it all in a folding boat the Trak T-1600 which had kept pace and performance with a Kevlar Current Designs Gulfstream almost a foot longer. What a wonderful trip it was, though we both knew we were exhausted and we both knew we would feel it in the morning. I was planning on paddling back across to Comox the next day, though I felt certain I wouldn’t, however I would see what I felt like in the morning. Though when I awoke the next day, I was so tired and the weather was so bad, I took the ferry back instead.

At the end of the trip I had stated “such a trip would be hard to sanely plan.”, and Hugh stated “and that’s why we didn’t plan that well! “
sometimes it is fun and interesting to throw yourself at something you haven’t quite given much thought to, only though if you are happy to have your limits pushed past what you know and directly face your own personal unknowns, as well as those in the environment around you.
Here’s to adventure, may we all find it!
J
Posted by Jaime Sharp at 5:31 PM

Email ThisBlogThis!Share to TwitterShare to FacebookShare to Pinterest
Labels: The Lead Up, Training, Trak Kayak

View Kayak Down Under NZ Journey in a larger map

Help the people of our city
We will rebuild!

Providing us with awesome NZ made expedtion Sea kayaks

The most versatile paddles in the world!

supplying us with an awesome tent. 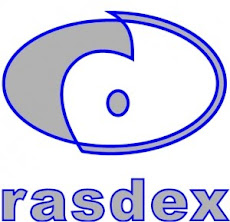 The Best Paddling Gear Out There

We Support and encourage

Keeping NZ coastlines and waters healthy for the world to enjoy.

Other NZ Adventures in 2011 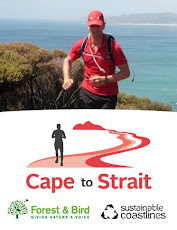 alex will run the length of the North Island

Tms is Attempting to Solo Paddle around all of NZ